From Horsebrook Mill to the Argentinian Pampas

Thomas Large Henly was always full of big, entrepreneurial ideas, which rarely came to fruition because they were too ambitious. He was born in 1826, the son of Abraham Henly, a prosperous Calne wine merchant. Abraham was born in Lyneham in 1788 and married Sarah Stiles of Whitley, Melksham in 1809. His father, Jacob Henly was then living in Lickhill House, the recent home of Patsy Crampton. When his father died Abraham let Lickhill House because he was trading as a wine merchant from premises next to Highlands House. He was Mayor in 1849 and a JP. He moved back into Lickhill House but traded from several different premises during 1840s- Silver Street, London Road – listed in trade directories. He died in 1852. He and Sarah had 10 children of whom Thomas Large Henly was the youngest but one. Large was his grandmother’s maiden name.

Thomas married Catherine Baily, daughter of Benjamin Bodman Baily, grain merchant of Berhills Farm and in 1849 while working at the Trevano paper mill at Bathford, he bought from the Baily clothier family the cloth factory at Horsebrook Calne, known as Swaddon’s Mill. Daniel Baily had acquired the mill in 1807 and it remained in the family trading as George Baily and Co, then Joseph Baily and Co

It was rumoured that Joseph Baily had spent £4000 modernising the mill in 1822 into a full scale factory, 9139 square feet in size with five floors 83ft by 23ft and was powered by two breast-shot water wheels with a fall of 6ft 6 inches, creating 12hp. The factory was worked in conjunction with Baily’s house on the Green where there was a dye house, drying stove and warehouses.

Thomas bought it for £500. He intended to convert it into a factory for scutching [pulping] flax in partnership with his friend J.C Andrews, but Andrews withdrew after a few months daunted by the size of the task. Thomas however was never cautious and continued with the project alone. He visited mills in Lisle and other parts of southern France to gain experience before opening his factory. The first flax factory in Wiltshire, it employed 50 workers. Besides encouraging local farmers to grow flax, he employed 70 labourers to grow and harvest flax on 1,150 acres of land he bought near Bishops Cannings.

Thomas was prominent in the economic and social life of Calne, elected Mayor in 1852 and 1856, he was also president of the Calne Free Masons’ Lodge and one of the directors of the Calne Railway Company in which he held shares.

He also operated a wine and spirits business registered at his home, South Place and opened another branch in Weymouth Street, Warminster. South Place was an elegant house on the junction of Silver Street and London Road, where he lived in luxury with his wife, 8 children, 5 servants and 2 governesses. This house was eventually bought by Thomas Harris and in the 20th Century became a doctor’s surgery until it was demolished in 1960s.

There were few health and safety measures employed in 19th century factories and in 1860 Frederick Hand, a fifteen year old worker, got his sleeve caught in the wheel of a machine as he attempted to oil it. His arm was almost torn off and required amputating. He died of tetanus some days later. This was another tragedy for his parents because his brother Henry, then 12, had drowned in the Bowood pond when attempting to slide on ice which broke in 1848. His father was landlord of the Black Dog tavern at the time of the accident.

Thomas’ flax business was dealt a disastrous blow in 1861 when a fierce fire at the factory gutted the inside and destroyed the whole upper storey.  A teenage boy, Charles Seymour trapped on the top floor was afraid to jump from a window into a pit of water below and was burned to death. Thomas was under-insured- only £650.50 and although he re-opened the mill three years later, minus two storeys and with a reduced staff, 50 people having lost their jobs, his business never recovered. Having failed in an attempt to stand for parliament, he declared himself bankrupt in 1867.

But Thomas had been dreaming of a more ambitious project. He devised a scheme to introduce flax growing in Uruguay in partnership with the owner of an estancia near Paysandu, 200 miles from Montevideo. He left England with his family in August 1867 but returned to Calne to recruit labour and purchase machinery.

While back in Calne he made his presence known by singing at a Christmas Church Concert, with his eldest daughter, singing “Maryland” his favourite party piece, attending a meeting of the Calne Railway Company and a parish council meeting.

He managed to persuade 25 labourers and their families to go with him. 4th February 1868 a crowd of 1,000 people waved goodbye to these adventurous Wiltshire folk at Calne railway station. Each family was given a farewell present by the local Temperance Society. They sailed on a ship called The Tycho Brahe.

This was probably the first trip ever by sea for these farming families and a long, hazardous journey it was via Lisbon to the Azores, then on to Montevideo via Rio de Janeiro up the River Plate. Once at Montevideo the 200 miles to Paysandu was completed on board a steamer up the River Uruguay.

We know the name of one of the party, Henry Wiltshire and his wife Ann, nee Hall, daughter of John Hall of Yatton Keynell who married in Calne the day before they embarked on their exciting journey. Their first child was born in Uruguay. Also John Clack who was the inn-keeper of the Fox and Hounds in Colerne on 1891 census- his daughter who was 9 at the time of the census was registered as being born in La Plata Argentina-suggesting that Clack had also joined the Henly party at some stage.

In an article to the press Thomas declared that work had commenced May 1868 and 63 acres of flax, 47 acres of maize and 40 acres of wheat had been grown already and predicted a profit of £20 and acre amounting to £3,000.

Something went wrong however because by 1870 Thomas is negotiating a move to the Argentinian pampas with a different class of labour in mind, offering in exchange for £150 per person to train the sons of middle and upper class families as flax farmers. What happened to the original labourers and their families is not clear. He appears to have abandoned them. It is probable that they got jobs on other estancias but the uncertainty surrounding their fate damaged Thomas’ reputation back in Calne.

He contracted with an agent Don Alison Melrose known as Steam Plough Melrose because he had introduced the American steam plough into the country, to buy a 27,000 acre estancia near the town of Fraile Muerto [now called Bell Ville] and advertised in the UK national papers and magazines offering apprenticeships in flax farming. He would train men on a profit sharing basis: after a fixed term they would be granted a portion of land to work in partnership with him. The Buenos Aires Standard praised the scheme, calling Thomas Plymouth Rock Henly- reference to the Pilgrim Fathers.

However, because he had no funds, Thomas had to seek colonists who could afford to support themselves, but unfortunately they were often unsuitable for the task, not being used to hard word like agricultural labourers, a fact that was pointed out at the time by Swiss and German colonists in the area.

The initial party of 50 apprentices arrived on the steam boat Oneida on 9th June. Thomas had arranged for Melrose to convey them to their destination. He had no idea that Melrose was in fact a con man, Joseph Hume Wright, who had defrauded a firm of Glasgow shipping agents. In a complicated deal with another shipping agent, he substituted the larger part of several consignments of muslin to India with coal and pocketed £10,300. He then did a runner, deserting his wife and children to resurface in Argentina as the respectable Melrose. There was a reward of £200 for his capture and when someone recognised him, alerting the Scottish authorities, he did a second disappearing act, leaving behind him a trail of debts and a second wife!

Thomas’ deal therefore had evaporated along with his transport arrangements. He had to pay hotel accommodation for the apprentices until he managed to rent a smaller estancia in the same area at Santa Carolina and other batches of apprentices arrived, but despite his optimism, all did not go well. The workers were not happy with their accommodation, complaining that Thomas lived in a comfortable house in Rosario rather than with them.

The doctor and minister who had arrived with the second party fell out with him and returned home.  The flow of new apprentices dried up and others left for jobs on the railway. Thomas had a cash flow crisis.

He wound up the business in December 1870 blaming Melrose and the unwillingness of his apprentices to work hard, but unable to let go of his dream just yet he was still offering to take on pupils on more stringent contractual terms. The Emigration Commissioners in London were very critical of Thomas, accusing him of deserting the colonists and disappearing without accounting for the money he had received. This was disputed by the editor of The Brazil and River Plate Times who insisted that Thomas’ accounts had been properly audited and that he was still living in Rosario.

The Mystery of Thomas Large Henly’s Where Abouts after 1871.

Where Thomas was after 1871 is a mystery. His wife Catherine seems to have left him, tired of his ambitious schemes doomed to failure, no doubt. She is recorded as being back in Calne in 1870s on her father’s farm at Berhills and then on the 1881 census she is living with three of her daughters at Clifton in Bristol, near Thomas’ brother John Henly, Vicar of Ruscombe. There is no mention of Thomas being with them.

Later she moved to America to be near some of her older children who had made decent lives for themselves in the States and Canada. She died in Belleville New Jersey 3rd March 1902 and a report of her death in The Devizes and Wilts Gazette 20th March 1902 describes her as the wife, not the widow of T.L. Henly, which assumes they knew he was still alive. Her death certificate however describes her as a widow.

Thomas is given a bequest in a family will of 1898 but there is no indication of where he is living and the mystery continued until a researcher working on behalf of descendants of the Henly family checked the 1901 census for Thomas’ siblings. His eldest sister had married James Smith in 1833 and moved to the London area. She was recorded on the census as Sarah L Smith, a widow and living with her brother Thomas L Smith.

If his name was Smith you would expect him to be described as her brother-in-law. His birth date and place of birth matched Thomas Henly’s exactly. Both he and Sarah had been given Large as a second name in honour of their grandmother. The census described his occupation as a flax exporter- too much of a coincidence for this not to be Thomas Large Henly.

Perhaps the census enumerator had made a mistake by recording him as Smith, but it seems more likely that he was deliberately living under an assumed name because of his chequered career and the resentment in Calne amongst the families of those labourers enticed to South America thirty years before.

He appears on the 1911 census under his own name, living alone in a multi-occupancy building described as a widower and flax exporter. His death is recorded in the Fulham register 1912, aged 86, but the exact date of his death or his place of burial has not been traced. 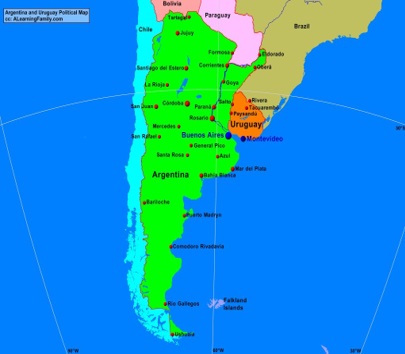 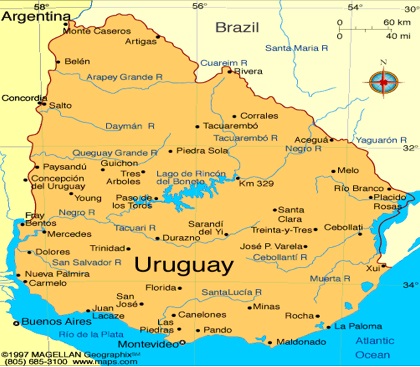