Libraries in Calne have a long history
With The Calne Literary Institution having 400 volumes accessible to annual subscribers by 1852. With around 80 members paying a shilling per quarter.

By 1870, the Literary Institution had begun discussions about raising money for a free library for Calne.  Canon Duncan was very active as the president of the literary institution and by 1871, the reading room and library was opened by Lord Fitzmaurice, M.P., free for use by the inhabitants of Calne, with 1200 volumes.

During the opening Fitzmaurice said of the free library: “Although, in educational matters Calne had always held their equal position with neighbouring places, in this matter, it was infinitely ahead of them”.

Carnegie and Calne’s Free Library
However, by the 1880s interest in the Literary Institution was fading, along with the funds.
In 1903, George Gough, the Town Clerk had written to Andrew Carnegie’s private secretary asking for a donation from his library project. Carnegie responded by July the same year, that he would give £1200 for the building of a free library, but with conditions:
The Free Libraries Act must be adopted, a free site given for the building, and £500 raised and invested to cover the penny rate.
Thomas Harris provided the land on New Road for the building. July 1904 saw Lord Kerry laying the foundation stone, in the presence of a large crowd, of the building, designed by architects, Smith and Marshall to be in harmony with the town hall.
On Saturday 25 March, 1905 the building was formally opened, with the mayor, Mr. Jefferys, handing a silver key to Lord Kerry, who opened the front door.
Along with the initial £1200 given by Andrew Carnegie, an additional £50 was given by him. Canon Duncan, president of the old literary institution, handed over the old library to the new library. Mr. Heath donated two copies of Marsh’s History of Calne. Calne Temperance Society donated £5 for new books. 160 volumes were donated by a North Country landowner anonymously. Thomas Harris, in addition to his original subscription of £405, added another £25 for the purchase of books.

The Building
The building is in modified Jacobean style, with a main body of rusticated limestone ashlar. Above the entrance is a tall pediment carved with Calne’s coat of arms and a panel inscribed with the words “Public Library”.
Railings to keep the dogs off the garden’s geraniums were given for the war effort, never replaced.

Inside the building the library was at the front of the building, a space that became the children’s library. The main internal space as a reading room, with reading slopes for newspapers and three tables to accommodate magazines. There were around 200 books in stock when the library opened. While the reading room was open between 9:30am and 10pm, the library only opened two nights a week between 7pm and 8pm. While the library was free for residents of Calne, outsiders paid a subscription.

Library Service
Over the years the library moved towards providing a professional service and it was an ongoing task to maintain the building and improve the book stock.
A county-wide scheme was developed by 1919. Being included in this scheme cost £8 a year for the library, in return the provision of 500 books was given to schools in Calne, which the children would be able to take home to read. By 1926, Calne authority had agreed to give access to non-fiction stocks, as well as lend specific titles that students requested. The contribution went up to £15 each year, but a loan of 120 books every six months and boxes of books sent to Calne schools was the benefit. 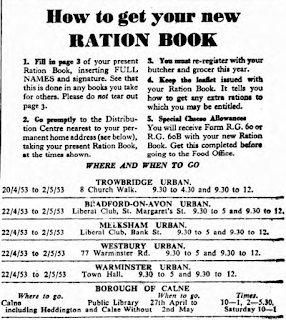 The 1940s saw the money dry up for the library, the reading rooms were in use as a Food Office and the location for the collection and stamping of Ration Books (which continued into the 1950s). However the library was back open by 1945.

During the 1950s and 60s there were many developments. The library was on the way to becoming an information centre and the children’s section grew steadily. In the 1980s oil heaters were finally replaced by gas heating. 1993 saw the loan of around 10,000 books each month.
During the Calne town redevelopment a large extension to the library was discussed and made it to planning stages, however it was eventually decided that a new library be built nearer the town centre.