Sue Boddington has been hard at work, recently releasing her third historical novel in three years.

This book covers a lot of the genuine history of Calne, Devizes, and the surrounding villages.

You can collect your copy at Calne Heritage Centre for £8.95, with profits going directly to the Centre.

Here's the synopsis to whet your appitite:


Cambridge graduate Will Barry is an idealistic young man who runs a prosperous, hundred acre farm, inherited from his father, in the Wiltshire village of Sandy Barrow. He has a firm belief in the power of education to enrich the lives of the villagers and has built a school on his land, where he teaches the labourers’ children basic literacy, with the help of his sister Lucy. He offers the villagers free use of the library he has created at the school and holds evening meetings to discuss literature, religion and politics.

Sir Roger Wanley, who was a close friend of Will’s father, owns most of the land on which the village stands and Will grew up playing with the squire’s two eldest children, Richard and Maria. It is assumed that one day Will and Maria will marry. 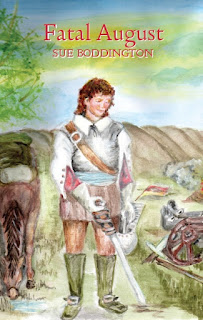 In the autumn of 1641 as the rift between King Charles I and his Parliament widens,
Will can see faults on both sides and supports a middle way. He is caught between Squire Wanley, who is loyal to the King and his Puritan friends, who support Parliament. Both sides accuse him of having a foot in both camps and try to win him over. When war breaks out the following year, a dogmatic decision by Wanley forces Will to take the opposite side, breaking with the Wanley family and yielding to pressure from some of the villagers to lead them to join the Parliamentary army.

The experience of nine months of fighting in Devon and Cornwall and a violent event back in Sandy Barrow, which includes a betrayal by someone he trusted, shatters his life and all he has worked for. Events culminate in a denouement on the downs, just before the Battle of Roundway and the necessity to withstand a tense siege in Devizes Castle. A wealth of local characters and their relationships weave a colourful tapestry set against the febrile atmosphere of a civil war.