Here you will find additional information and pointers for many of the points of interest on the trail.

This plaque is located outside the door of Calne library and reads:

The Dutch physician, Jan Ingen Housz MD, FRS (1730-1799) was doctor in the Austrian Royal Family but was in England in 1779. Before returning to Vienna he spent that summer performing over 500 experiments in a house near London.

These proved, for the first time, that the green parts of plants absorb carbon dioxide and release oxygen in sunlight: in other words they purify the air we breathe. At the same time the carbon absorbed is converted to starch so that plants are also the ultimate source of all our food. We therefore commemorate the genius of Ingen Housz, the discoverer of what we now cal photosynthesis.

He returned to live in England later in life and was a frequent guest at Bowood House, where he died. He is buried in Calne, in a vault under St. Mary's Church.

The decorative paving was created by members of the Calne Artists Group: David Reeves the overall design and ceramic leaves, Vivien ap Rhys Price the head of Ingen Housz from a 1768 medallion. Photocast of Liverpool cast the bronze.

Who was Ingen Housz Anyway? by Norman and Elaine Beale

Echoes of Ingen Housz by Norman and Elaine Beale

Information on the Pgs Sculpture theft

Concerned that there were no good schools based on Anglican doctrine and tradition for the girls in Calne and the surrounding area, Canon John Duncan, Vicar of Calne, proposed a new school.

The most important supporter of Canon John Duncan’s plans for a school based on Anglican doctrine was Miss Ellinor Gabriel, who lived at Horsebrook House, 14 The Green. Along with being the school’s first Superintendent; serving for 6 and a half years, she also covered the deficit in the budget, reportedly paying out well over £300 from her own pocket.

Miss Gabriel bought 30, The Green, to be the first home of St. Mary's school and in 1890 bought and gave the two houses adjoining the schoolhouse to provide for additional accommodation.

In 1887 she gave £1000 to create the Frances Gabriel Scholarship, to be invested to provide 3 scholarships, which were awarded regularly for many years.

Also in 1887, Ellinor Gabriel gave the income from £110 to maintain the organ in the church.

She had also offered the Town Council £1000 to build a convenient hall in commemoration of the Queen's Jubilee, but for some reason this was not accepted.

Consider the Lilies: A history of St Mary’s Calne by Elizabeth Christie

Calne, From the Canal drawing by William Westall 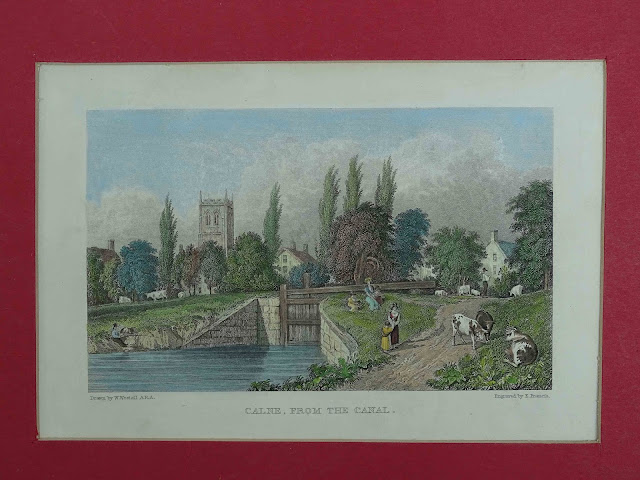 Calne, Past and Present: Chaveywell Spring and Calne's Water Supply

Thank you for participating in our trail!