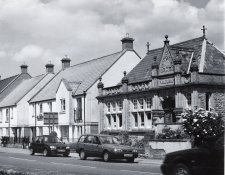 In the early 1990s, as a result of an initiative of the Calne Town Council and the Calne Project, a working party was set up to pursue the aim of establishing a heritage centre in Calne. Its first achievement was to mount an exhibition in 1992 called 'A Taste of Harris' covering the history of the Harris bacon industry in Calne. It was a great success and some of the material is now on display in the Centre.

For 10 years, the working party sought to find suitable premises for the Centre eventually settling on an arrangement with the Calne Town Council to lease the Carnegie Building. Until the opening of new building in 2001, the Carnegie building was the home of the library in Calne. After the library moved, Calne Town Council aquired the building from the County. Recognising the strong local feeling that the building should remain in public use and its suitability for the Heritage Centre, it has been our home since the official opening by the Earl of Kerry, 5 October, 2004.

The Centre has been created and is managed by the voluntary work of the Trustees and is staffed by volunteers provided by the Friends of the Centre.

For more information, pick up our 'The Story of Calne Heritage Centre' leaflet the next time you visit.